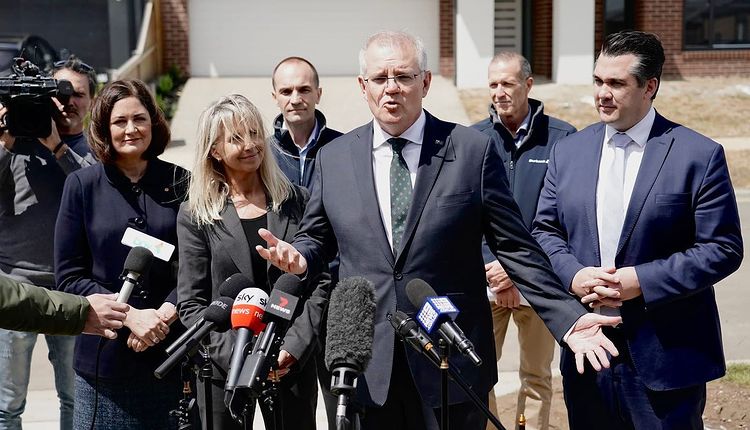 On Thursday the 9th of December, we had the privilege of welcoming and hosting Prime Minister, Scott Morrison, Federal Housing Minister, Michael Sukkar, Senator Sarah Henderson and Liberal candidate for Corangamite Stephanie Asher to one of our building sites for an exciting Federal Government announcement. Along with our Burbank Group Managing Director, Jarrod Sanfilippo, National General Manager, Louis Sultan and Burbank customers, Bonnie and Matt.


What was announced by the Government?

The Federal Government announced an extension to their Home Guarantee Scheme, reissuing up to 4651 places that went unused in the latest round of allocations which closed recently.

How does it work?

The scheme is aimed at helping Australians get a faster leg up on the property ladder by avoiding paying lenders’ mortgage insurance.

Designed to help new buyers own a home sooner, with a deposit of as little as 5 per cent for first time owners or 2 per cent for single-parent families.

Lenders mortgage insurance is a form of insurance that the lender takes out to cover the risk of the borrower being unable to repay the mortgage. They of course then charge the borrower.

Most banks and lenders require a minimum deposit of 20 per cent of the property’s value for the borrower to be exempt from lenders mortgage insurance so getting access to the new government schemes can make a big difference – the government says you could save around $10,000.

Under the scheme, the Government goes guarantor for the rest of the deposit, in effect allowing people to take out low-deposit loans and not spend extra years saving for a 20 per cent deposit.

The lender will still do their normal checks on your financial situation.

The Home Guarantee Scheme is eligible for first home buyers building a new home – meaning a home that has not been previously lived in. This includes house and land packages, newly constructed dwellings and land with a separate contract to build a home.

The Home Guarantee Scheme is exclusively for first home buyers who are current Australian citizens and meet the scheme's eligibility criteria.  There is also a price cap on the value of homes that can be purchased.

Source: New Home Guarantee Fact Sheet, June 2021
* Note that regional centres only include the areas identified as (1) in New South Wales, Illawarra and Newcastle and Lake Macquarie, (2) in Victoria, Geelong, and (3) in Queensland, Gold Coast and Sunshine Coast.

It was previously announced that only 10,000 of these loans are available nationwide each financial year. However, Prime Minister Scott Morrison and Housing Minister Michael Sukkar announced their plans to maintain access to the Home Guarantee scheme. As many as 4,651 unused guarantee credits from the previous financial year will be reissued.

Who has received government assistance so far?

Between the Home Guarantee Scheme and other Government homebuyer incentives like HomeBuilder Grant and First Home Loan Super Saver Scheme, more than 300,000 Australians have been helped into their first property via this government assistance.

What to find out more?

The scheme is administered by the National Housing Finance and Investment Corporation. For more details head to their website here.

Here is also the latest press release on the announcement.

Alternatively, chat to one of our New Home Consultants who can set you up with a free consultation with a home loan expert from our finance partners.